A large amount or number.

Oceans of people came to the rally.

I don't know what's in that drawer--just some odds and ends, I think.

Off on the Wrong Foot:

A bad start to a relationship or job (or other responsibility).

We got off on the wrong foot. Let’s start over – I’m sorry.

Don’t have to deal with a tough problem anymore.

Your brother told me he broke the statue. You’re off the hook this time.

It’s understood that whatever is said won’t be repeated, or it won’t be quoted to the person who said it.

Off the record? I think our boss is stupid.

On Pins and Needles:

Nervous about something that is going to happen.

I’m on pins and needles wondering if my girlfriend is pregnant!

On the back burner:

Something that is not a priority.

I put going to the gym on the back burner because I am very busy with a big project at work.

Undecided. (Think about this literally too. If you’re on a fence, there are two sides.)

I’m on the fence about a lot of things. I never can make up my mind. 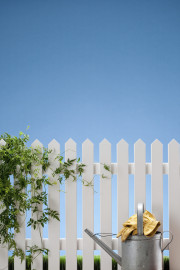 Without thinking about it much.

I learned how to drive on the fly. My dad gave me the keys and said drive!

On the Same Page:

When people agree on something.

He and I are on the same page now. We understand the situation.

One foot in the grave:

When someone is close to death.

John is in terrible shape. He's got one foot in the grave.

A person or thing that is easy to understand.

I can immediately tell when he gets angry. He's an open book.

Out of the Blue:

Something that happens unexpectedly.

It started snowing out of the blue!

Out of this World:

Something that is completely incredible. Super cool. Exciting.

The waterfall I saw in Thailand was out of this world!

Over My Dead Body:

You absolutely will not let something happen.

(Mom speaking to daughter) – Go out with Mike? Over my dead body.

Don’t you think your clothes are a bit over the top?