Throughout my years teaching English, I've often heard my ESL students mistakenly use hope instead of wish - or vice versa. It's really not too difficult if you learn the distinction properly. Basically, when you say wish you want something to change, but it probably won't change. When you say hope, the change is possible. See? It's really not that difficult!

An easy way to remember is to think about the President of the United States, Barack Obama. Barack Obama built his political campaign around the idea of hope in 2008. He believed that change was possible. Thus, the poster says "hope." 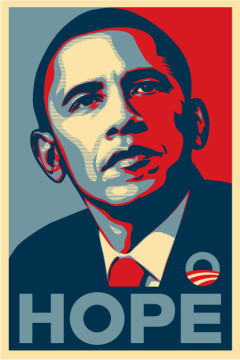 I bet you recognize this image!

You can also use wish to say that you want someone to do something differently. To do this, use wish+would.

After evaluating these examples, you should be able to properly use wish or hope when you are communicating in English. Take a moment to re-read the information, and practice making some sentences of your own.

While our focus here at Skype English Class Now is always on verbal communication, we take the time to teach you valuable lessons about all aspects of English communication. Click below to sign up for a free class!