Back the wrong horse:

To support the losing side.

When things happen one after the other.

I have back to back meetings all day today!

Back To Square One / Back to the Drawing Board

Start all over again.

Well that didn’t work. I guess we’re back to square one.

Someone who is a bad influence on others.

Stay away from them. They're a bunch of bad apples.

Barking Up The Wrong Tree:

Complaining to the wrong person.

He was barking up the wrong tree when he told me I was rude. It was his friend who said something bad!

Beating Around The Bush:

Don’t beat around the bush. Tell me what you want.

Doing everything possible to help.

I will bend over backwards to make sure the customers are satisfied.

Best of Both Worlds

Getting advantages from two things/places/people.

He has his mother’s looks and brains, but he also has his father’s calm, positive attitude. That’s the best of both worlds!

Between a Rock and a Hard Place:

I had to either take the 5AM flight, or miss my friend’s wedding. I was between a rock and a hard place.

Someone who thinks they're cooler or more influential than others.

She thinks she's a real big shot with her new haircut.

To do something until it is completely finished, especially if it is unpleasant.

He will continue to defend his vices until the bitter end!

Blood Is Thicker Than Water:

Family is stronger/closer than anything else.

A way of saying 'I got you!' (with a joke). A roast is an event where a bunch of people (normally comedians) all make harsh jokes about one person, but they joke with love and respect usually.

You're so dumb, you think socialism means partying! Boom roasted!

How your brain works (is it more creative, practical, etc.).

A period or situation marked by significant societal change.

We're in a brave new world of medical technology.

A way of saying good luck – often used in performances, but also whenever someone needs luck.

Break a leg! I hope your piano performance goes great! 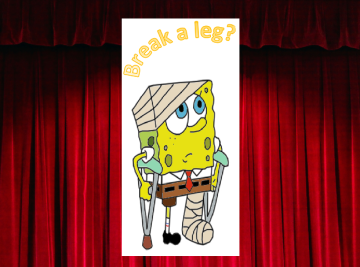 To end a relationship.

She broke up with him for lying.

To bring energy or ideas to something.

Kia designs were pretty boring in the past, but since 2006 Peter Schreyer has helped to breathe new life into them.

To flatter someone, to be nice to someone for personal gain.

The student tried to butter up the teacher before she graded the essays.