If you follow the news or drink coffee regularly, you may have heard that Starbucks has a new drink for a limited time only. It's called the Unicorn Frappuccino! It is pink with a blue stripe and, because of it's beautiful, vibrant colors, was purposefully created for photographing and sharing on Instagram.

The drink is controversial because of the large amounts of sugar in it. Baristas also say that it is difficult to make and are overwhelmed with the large numbers of people ordering it.

The American comic, Stephen Colbert, joked about the Unicorn Frappuccino. He said that Starbucks will come out with yet another mythological drink--The Minotaur Macchiato.

"It will gore your taste buds and leave them at the center of a terrifying labyrinth of flavor," he said.

In order to get this joke, you need to understand at least a little bit about mythology and mythological creatures. References to them occasionally come up in popular culture, so it is important to know something about them. Additionally, they're interesting and fun to learn about!

Unicorns look like horses with a single, spiraling horn projecting from their foreheads. Tales of unicorns date back to antiquity and are referenced in many different cultures.

The Minotaur is a creature with the head of a bull and the body of a man. It was said to have dwelled at the center of a labyrinth (or maze) on the Greek island of Crete.

The myth of the dragon appears all over the world--from China to Europe. In European mythology, the dragon appeared as a giant, fearsome, firebreathing lizard. In China, on the other hand, dragons were less of a threat. The were said to float gracefully through the sky and were long, like serpents. 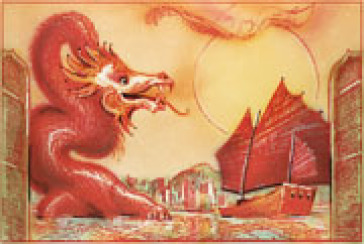 A frequently referenced creature with the body, hind legs, and tail of a lion and the head and front legs of an eagle

A many headed serpent that would regrow several more heads if one were chopped off.

Cyclops are referenced in Homer's ancient Greek epic poem, The Odyssey. It is a one eyed giant who eats people.

Part human, part lion who would ask a riddle in order to grant travelers entry to the city of Thebes in Greek mythology

Another short, human like creature that lives underground. People often have gnome lawn ornaments in their yards!

Have you ever heard people reference mythological creatures? If so, where?

What other mythological creatures do you know that were not included in this list?