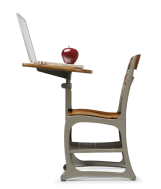 1. The ____ between the bottom of the door and the floor is big enough for a mouse to walk through!

3. That Shakespeare play was long! I'm surprised I _____ it without falling asleep.

4. We wrote our own wedding ____ to say during the ceremony.

5. "______ coffee and dessert after your meal?" the waiter asked the guests at the fancy restaurant.

a. Would you care for

b. Do you want

a. Would you care

b. Do you want

2. It's very important to think about the context of the sentence in number 2. This person is describing what he or she wants to eat for dinner tonight. We can use the general word "want" in this case, since it is clear the speaker is not starving. Somebody would yearn for food if they were very hungry or hadn't had a particular kind of food that they really like in a long time because "yearn" means to want something deeply.

3. To "get through" something means to finish something that is very long or difficult. to "finish" something, on the other hand, is the general word we use when something ends. Since the speaker had difficulty finishing the Shakespeare play, it would be more appropriate to use "get through" in this context (although "finish" would still be correct--though less descriptive).

4. A vow is a formal promise. Since a wedding is a very formal ceremony, "vow" is commonly used to describe the promises that a bride and groom make to each other.

5. "Would you care for" is a formal way of saying "Do you want." You can almost always use these interchangeably, although in formal settings, it is more polite to say "would you care for...?"

6. Since this sentence is not about the space between two things, hole is the correct word to use in this context. Remember, a hole is an empty space in a single thing or object.

7. Since the prisoner in this sentence probably really wanted to leave prison after such a long stay there, he or she would be yearning for freedom. "Want" would be OK to use here, but it would be less descriptive.

8. Since dinner is not usually something that is long or difficult, it is more appropriate to use the general word, finish, in this sentence.

9. Context is the key in number 9. Nothing in this sentence suggests that this is a formal setting. It sounds like something one friend might casually say to another. Therefore, "promise" is the more appropriate word for this sentence.

10. Since this sentence is about watching a soccer game, it is not a formal setting. It would sound silly if you asked, "Would you care to watch the soccer game?" In situations like this, stick with the general phrase, "Do you want...?"